Norman Lovett is a stand-up comedian, with a dead-pan style, famous for playing the computer ‘Holly’ in the Red Dwarf TV series 1 and 2, series 7 as a guest star, series 8 as a regular and series 12 as a guest star. From Series 3, Holly was played by Hattie Hayridge.

Holly’s user interface appears on the ship’s screens as a disembodied human head on a black background.

Norman Lovett’s Holly always speaks in a droll, slightly monotonous, quiet voice, even when sounding alarms or during a disaster:

Norman Lovett’s reason for leaving Red Dwarf was because he was living in Edinburgh and didn’t want to travel to London for filming. I find that peculiar. I’m assuming that he wasn’t so rich that he could afford to give up work. So why ditch his most famous role? Even more peculiar as he now lives in Kingston-upon-Thames, on the edge of South-West London. To be fair, I don’t know what else was going on, perhaps he had young children at home that he didn’t want to miss growing up – but still give up the role of Holly, really?

I’m a big fan of Red Dwarf and so when I heard that Norman Lovett was performing a one-night stand up show in Kino Světozor I bought a couple of tickets (550Kč each) – the furthest forward I could get was Row 10, out of maybe 24 rows.

Kino (Cinema) Světozor is on Vodičkova street and really close to the Václavské náměstí tram stop. The entrance is in the Světozor passage.

You then walk down some steps into a small area with just a few seats, a bar with a long queue and some toilets – there isn’t a cloakroom. Apparently there are three cinemas; the show was in the velký sál (largest). I think the place would be better if the smallest cinema was used for additional seating and an improved bar area.

The current bar looks okay, but is tragically slow – it took 15 minutes to get this close. 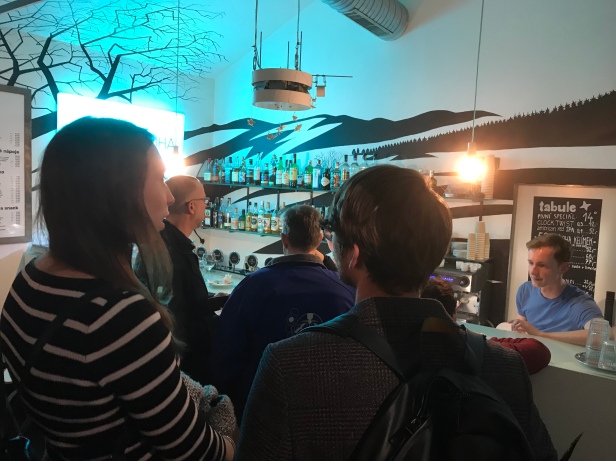 Despite the ticket saying don’t bring food nor drink into the auditorium, I asked and was told that drinks could be taken in.

The velký sál of the cinema wasn’t that big. I walked to the last row to take this picture.

Almost every seat was sold.

The seats were padded and comfortable. I always choose end of the aisle for ease of escape and this was an especially good choice as the row ends have a fold down seat where we could put our coats.

Norman Lovett (Norm) was introduced by a woman who I hope wasn’t supposed to be a comedian as she wasn’t funny.

His comedy style is very similar to the Holly character – I suppose that was why he was chosen to play Holly. It’s slightly surreal and at times I wasn’t sure if he wasn’t just having a secret laugh at the audiences expense while he discussed various items found in his hotel room, or read from a book of ridiculous quotes made by celebrities. The show is either unscripted or brilliantly scripted to appear unscripted. The audience who were 99% Czech seemed to enjoy the show. There was a lot of goodwill in the room because it was Holly from Red Dwarf.

Here’s a clip of Norm at some other gig – I didn’t film anything.

The show lasted slightly over an hour. I did enjoy it, although I think 550Kč was expensive (for Prague).

I took this photo after he left the stage.

Don’t be surprised if you see that on Flickr or Getty Images next time you search for microphone stand and chair.

Norm returned after the show to sign autographs and have photos taken. He was so generous with his time that is became obvious that we’d be waiting ages before we’d have a chance to say hello – which is all I really wanted to do.

So we left and found a Tram 6 outside  perfectly timed for the journey home.

5th March update: I found that CT24 did a short interview (for some reason you need to click the sound button in the bottom right):