26th October 2018 update: Lime Scooters ‘temporarily’ banned by Prague 2. Apparently, Lime didn’t ask Prague 2 before deploying the scooters also Prague 2 residents have been complaining about riding on pavements and leaving scooters in a random places. The Prague 2 website (in Czech) has the announcement http://urad.praha2.cz/V-rijnu-Prahu-2-zaplavily-elektrokolobezky.html

I checked the Lime app this morning and found that Prague 2 is now shown in pink (see below) – still quite a few scooters are parked there, but I guess these will be swept up by the Lime ‘juicers’ – those paid by Lime to pick up and recharge scooters. I’m not sure what happens if you drive a scooter into the ‘red’ zone – it would be very sci-fi if the thing refused to move into the zone eh? 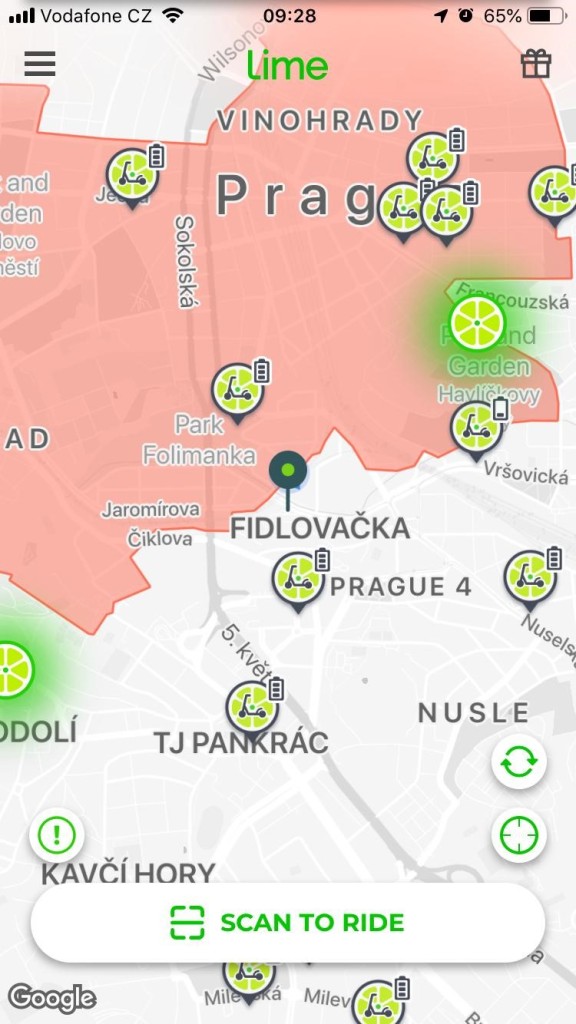 Lime green electric scooters have appeared in Prague over the last few weeks. People whizz past on them. You can spot them parked unattended in the streets and nobody seems to steal them. I decided to find out what the deal is with these scooters.

I found https://www.li.me/ – quite smart to use the .me extension to make the word lime as I’m sure lime.com would cost a lot more. It turns out that this US company has placed electric scooters across the US and now Europe.

I downloaded the Lime app from the app store, entered my details and looked for a scooter. 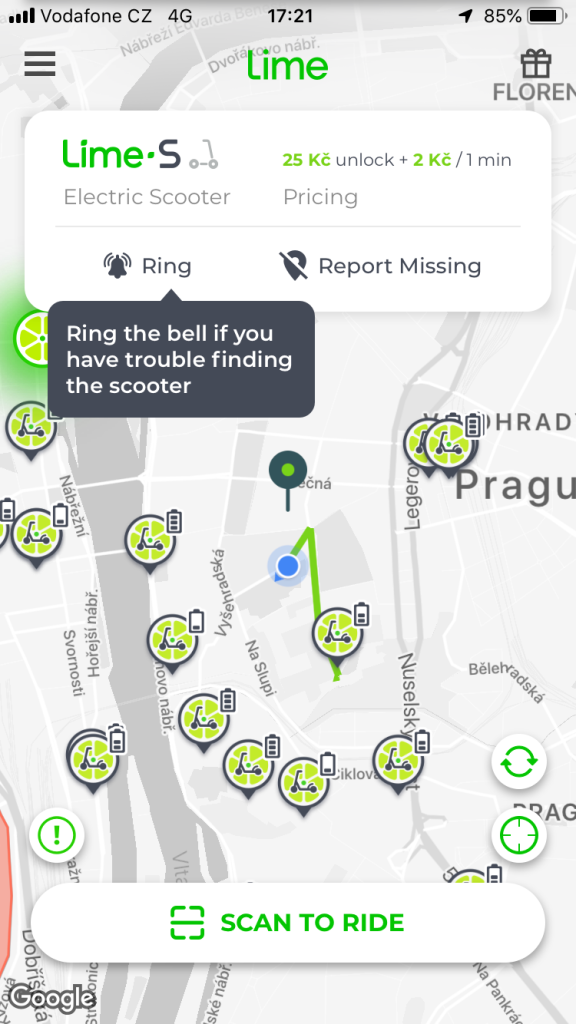 I’m amazed at how many scooters I could find, although several looked a bit low on battery.

I found a scooter and clicked ‘scan to ride’ – there was a QR code on the scooter. The Lime app linked with Apple Pay and took 25Kc. The app also warned that I needed to obey local regulations, be over 18 and have a full driving licence. It’s a bit surprising that I was able to get so far without anyone actually verifying my age or driver status. I also have no idea what the local regulations are for riding an electric scooter in Prague.

I decided to take the scooter to a quiet side street – it started beeping and I wasn’t sure what I was doing wrong. Then some guy appeared and asked if I’d rented the scooter and did I need some help. I was initially amazed that they had people around to assist – but then it turned out he was just some guy who wanted to rent the scooter and had pressed the bell button in the app in order to find it.

First issue with Lime: It doesn’t look like you can reserve a nearby scooter so it’s still there when you find it. You could see one on the map, walk to it, only to find that it’s been rented.

I rode the scooter – controls were quite easy, just accelerate and brake. The cobbled streets of Prague made the journey a bone-shaking experience.

Second issue with Lime: I don’t think they’ve considered the terrain in Prague.

I decided to park the scooter. This ‘How to Park’ Matrix-inspired video is pretty good, although it talks about cycles rather than scooters:

I left the scooter on a wide pavement and clicked ‘lock’ and ‘end ride’ in the app. 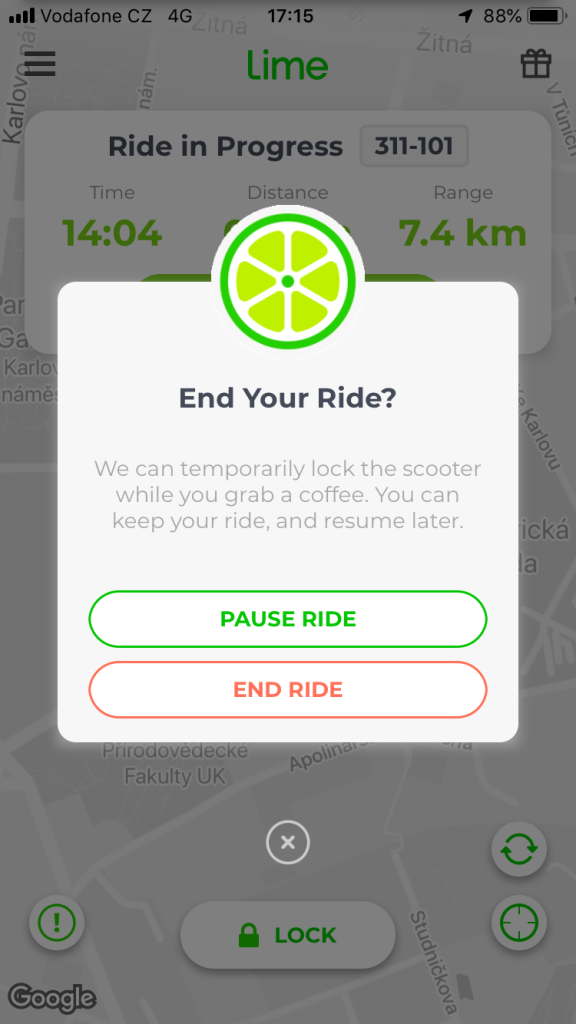 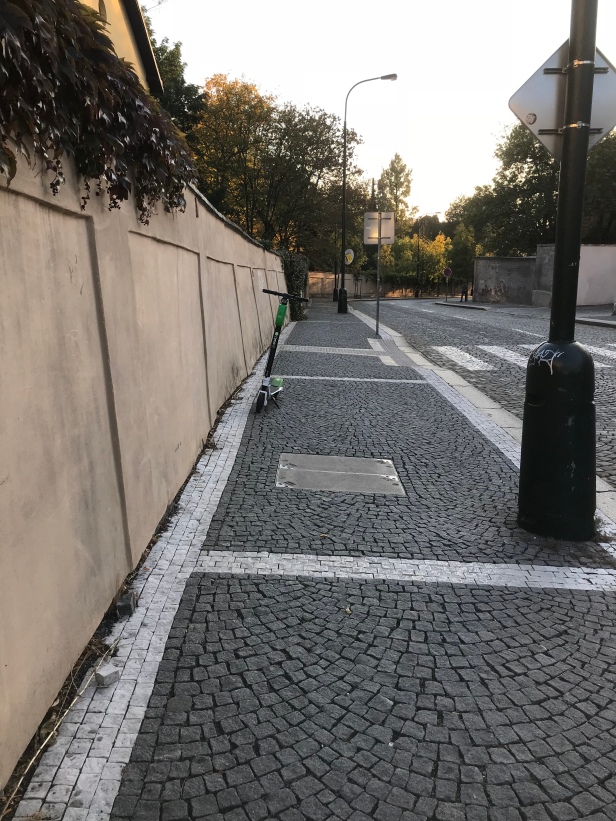 Within seconds, a couple, one on a Lime scooter, one running, had rented the scooter. They drove off and didn’t seem to mind being shaken about.

Well I have the Lime app now and I assume it works for any Lime scooter in any city. I’m not sure if I’d bother renting another scooter in Prague, unless it was to ride around a park that had smooth paths. But if I found myself somewhere else, I might use Lime for sightseeing.