Momoichi opened in Vinohrady mid-2016. They actually call themselves a ‘Coffeetearia’ and I’m not sure if that is a deliberate misspelling in line with the trendy theme or simply a mistake.

I’d pretty much ignored Momoichi until they announced they would be running a special dim sum day on Saturday 13th January 2018. We booked for 7pm.

Once inside, the place has a modern, stark, cool theme – it isn’t cosy. The friendly waitresses all wear black t-shirts with fun slogans such as ‘smile for me’ and ‘ask for a hug’. Trendy lounge music was playing. The place was busy and attracted a young eclectic crowd: 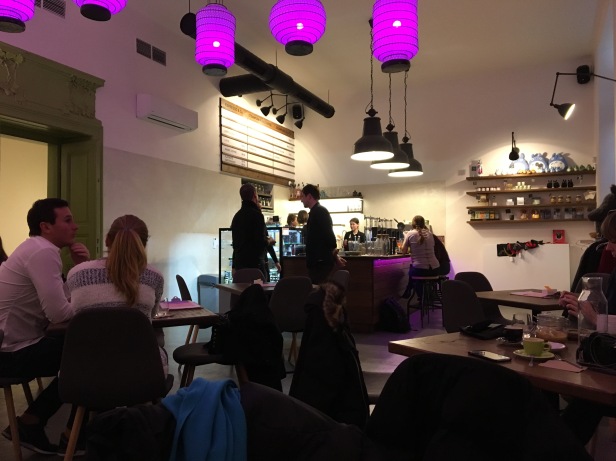 The waitress poured us two glasses of water. These were topped up during our meal, although I noticed other tables had a carafe. The dim sum menu looked good:

We went for two dim sum sets. The sake was pretty expensive and I’m not that big a fan of sake anyway. We took a look at the standard menu that also listed some wines. The choice of wines was really limited and the prices completely ridiculous: 1dl of Austrian Frankovka was 85Kč – so a large glass of what is already an over-priced wine in the shops (maybe 280Kč a bottle) was 170Kč.

The dim sum was excellent:

It was so good that we ordered a third plate to share. I couldn’t face another glass of the world’s most expensive Frankovka and went for a Gin OMG & Bohemsca tonic 135 Kč. The waitress returned to say that they’d ran out of that gin and only had the more expensive Gin OMFG & Bohemsca tonic limited edition 165 Kč – I accepted that, but really I think they should have just provided the more expensive version at the same price.

The standard menu had some interesting items on it, but was almost impossible to read with the font size 5pt or less.

I realise that this a place for young people, but I coincidentally had an eye test at the optician a few days before and was told I had perfect vision without need for glasses – luckily the Momoichi menu wasn’t part of my eye test as otherwise I’d be walking around like Harry Potter now!

An electronic Japanese toilet is installed in both mens’ and ladies’ washrooms:

I didn’t try this version, but my previous experiences in Japan have mostly resulted in a disconcertingly warm seat and water spraying upwards – don’t press the buttons while looking at the pan!

We asked for the bill and were told to pay at the counter. I suppose that’s fine for a coffee shop – less so for a restaurant. And that leads to the question – is this a restearant (sic.) or a coffeetearia (sic.)?

The food was good, but I don’t think I will be back because of the wine choices and prices. If you decide to visit – take a magnifying glass!